Our Independence Day celebration got off to an early start on Saturday night when we went to see the local fireworks display here in Salem. (It was on the 3rd because, well, it was probably cheaper. This is pretty good business sense. We are in a recession after all.) We were very excited for Scarlett to see fireworks for the first time. She watched the first 45 seconds or so and then slept for the following 29 minutes and 15 seconds of the show. She didn’t even flinch during the finale. I guess she inherited my acute narcolepsy, which I get from dad, who got it from his father. Oh, well.

The next morning as I was fixing Scarlett her breakfast at 6:00 a.m., I went to get Sophie (click here for Sophie’s biography) and could not find her. I searched my bag, the car, the stroller. Nowhere to be found. I started to sweat a little. This is la petite girafe who has the magical power to soothe Miss Sassy Pants. (Oh, not to mention that she cost $20.) Where, oh, where could my little giraffe be? Then I realized that she probably fell out of the stroller when we folded it up to put it in the car. The horror. Running on a mere three hours of uninterrupted sleep, I crazily woke Brian to feed Scarlett her breakfast, so that I could go rescue Sophie. I ran out of the house in a pink nightgown, a cardigan and my gold sandals, jumped in the car, pushed the bed-head from my face, and proceeded to (not quite) speed over to Ninth Street.

As I approached where we had parked the previous evening, I saw her. There lay Sophie on the side of the road, amidst some clean-looking trash, with a tire mark across her rosy little face. Crisis averted.

After Sophie’s bath, coffee, and a hurried morning, we headed to Pittsburgh for the rest of the day. As part of Brian’s Father’s Day gift, I wanted to take him to Major League Baseball game. (I offered the choice of either Pittsburgh or Cleveland. Even though the Pirates haven’t had a good team since the 1990s, I was not-so-secretly hoping that Brian would choose them.) Luckily for me, my best good friend, Jaime, grew up in Pittsburgh and was home for the holiday, so she and her husband, Josh, met up with us at the game. We sat in the outfield bleaches upon my dad’s recommendation, which turned out to have a little shady area with some tables under it. This is where Scarlett, Jaime, Josh and I spent most of the game. 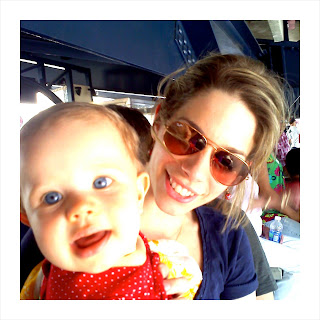 Brian braved the sun and saw a really great game from the stands. The Pirates actually won, after scoring six runs in a single inning. After the game we stopped by my family’s annual Fourth of July picnic for some delicious food and then headed home. A lovely day indeed.