Not Until I’ve Smoked My Coffee and Drunk My Cigarette

After my grandma died, we found a button with this gem of a phrase on it among her costume jewelry. Clearly, it harkens to a time past when smoking was not only socially acceptable but the norm. I’m not a smoker, but the sentiment resonates with me, especially since, well, I’m just not a morning person. And I’m beginning to think that Scarlett is. Yikes.

A few days ago, she rolled over for the first time. Now that’s she’s figured it out, it’s all she wants to do. She’s like a spring-loaded toy. I put her on her back, she immediately rolls over. Try to move her back, she’s fighting me to get back on her tummy. Today, she wanted to roll at 6:45 a.m. She rolled into me repeatedly and then punched me in the face repeatedly in her attempt to wake me up. Really? Don’t get me wrong; I know that many, many people are up waaaaay before this, but when you’re not sleeping for more than four hours at a stretch and up three times a night, it’s early.

At the moment, she is playing sweetly and quietly in her rain forest (or jungle motif?) play gym. She is on her tummy intent on getting the zebra’s tail. Oh, I guess it is early. I didn’t even notice the dog food on my foot until the dog came over and licked it off my toe. Oops. Maybe I should have another cup.

Here’s my little tootsie roll. By the way, she is not yet an ambi-turner; this girl only goes to the left. 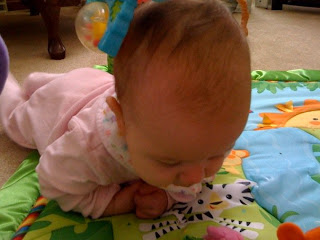